New York’s favorite underground innovation salon is back with a heavy dose of sanity to help you get through this election. Join us for a fun evening of socializing, live music, and inspiring short presentations of mind-blowing projects by the thought-leaders who envisioned them.

The future of the economy, media, and planet are major themes in this election cycle. At this Lucid event we will hear several unique perspectives from people who are at the forefront of determining what the future of these fields will look like.

Don’t wait to get your tickets! The Future is coming. See it at LucidNYC first!

He is a real estate developer and the Founder and Managing Principal of Macro Sea. Over the past 20 years, Mr. Belt has developed a diverse range of projects that vary widely in size, scope, and location, and has become a leader in creative development and interim use projects. In the past 10 years, Mr. Belt has executed over $1 Billion worth of private and institutional development projects in New York, Philadelphia, Princeton, Rome, Paris, Salamanca, and Dublin.
New Lab is an 84K sqft interdisciplinary space designed to support entrepreneurs working in emerging technologies such as robotics, artificial intelligence, and connected devices.  Located in the Brooklyn Navy Yard, the former epicenter of American shipbuilding is state-of-the-art once again.

Noah Rosenberg is the founder, CEO and editor-in-chief of Narratively, a platform devoted to original, in-depth and untold stories. Launched in New York in September 2012, Narratively was listed at number six among TIME Magazine’s “50 Best Websites of 2013.”
A print, video and multimedia journalist, Rosenberg was a spring 2012 fellow at The City University of New York’s Tow-Knight Center for Entrepreneurial Journalism. He is a frequent contributor to The New York Times’ Metro desk and he has also written features, essays and breaking news for the National, Travel, Sports and Styles sections. Both his writing and photography have been featured on The Times’ front page, and he has also shot and produced documentary video for The Times, including helping the Metro desk pioneer its use of iPhone video reporting.
Previously, Rosenberg worked for Univision‘s Interactive Media division as a product manager, and spent the summer of 2010 in South Africa, where he was The Wall Street Journal’s video correspondent at the FIFA World Cup. While there, Rosenberg also took photographs and wrote human-interest pieces for The Wall Street Journal and GQ magazine. He has also produced, edited and reported on-camera for CBS’ Channel One News and written for New York magazine. 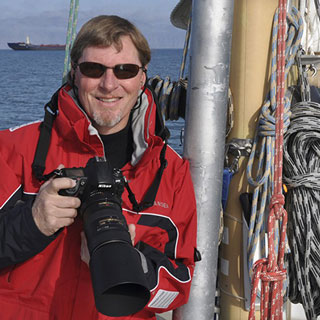 Over The Horizon is a 2016 pictorial memoir by David Thoreson. The sailor from Lake Okoboji, Iowa, had already traveled extensively when he began sailing the high seas with a “salty” farmer from southern Minnesota. Together they began exploring the far reaches of the globe. On their second attempt at crossing the Arctic’s Northwest Passage, Thoreson realized they were witnessing a rapidly changing Arctic and ocean environment.

With his many extreme expeditions and Midwestern roots, photographer, sailor and explorer David Thoreson has a unique life story. His path has been anything but traditional. Thoreson grew up in a small town in Iowa, learned to sail and love the water as a boy on a glacial lake created by a changing climate. He shares how these experiences lead to a life of exploration and discovery at the far reaches of the globe. David’s book and presentation combine stunning visuals and story-telling about sailing in the ice, lives of native hunters, scientists in the Arctic and ultimately discovering and meeting the issue of climate change face-to-face. Thoreson believes the climate issue to be a game-changer and a powerful uniting force crossing previously unexplored boundaries.

David Thoreson is an Explorers Club Fellow and the first American explorer in history to sail the Northwest Passage in both directions. Thoreson has sailed more than 65,000 nautical miles, including be­low the Antarctic Circle, three times across the Atlantic, six times over the Arctic Circle, twice around Cape Horn and, in 2009-10, a 28,000-mile circumnavigation of North and South America. His documentary of that voyage was nominated for an Emmy and published in the beautiful photo book, One Island, One Ocean.

Gregorio Uribe Big Band, is a 16-piece musical project that blends Latin rhythms with funk groove and jazz. This Big Band project brings together musicians from 6 countries around the world that under Gregorio Uribe’s leadership and vision create a masterpiece of Latin rhythms. With a remarkable compliance of trumpets, trombones and saxes soaring over an amazing percussion section and the leader of the group dancing to the beat while playing the accordion, this band brings new and modern arrangements to Latin music that could be compared to Second-Line Bands from New Orleans.
The band conquered Boston and the hearts of Americans and Latinos becoming a must in festivals and venues such as the well-known Regattabar, the Tito Puente Latin Series, and Worcester Latin Festival to name a few around Massachusetts and New England. Uribe brought to life his vision to create a band that blended different genres such as funk and jazz with the intriguing folkloric rhythms of his native Colombia.
This energetic and intelligent approach to the music of his country has led him to share the stage with such renowned artists as the six-time Grammy-winner Rubén Blades and Latin Grammy Award-winners Aterciopelados. Uribe was born in Bogotá, Colombia, and started his musical life playing drums and guitar in traditional Colombian music and rock bands. Today, his music reflects the energy of his teenage years, the love for his country and a unique passion for life. Bringing to life a danceable beat with a touch of romanticism into each one of his songs; songs that inspire love and plenty of sabrosura. Uribe has found his own way into the hearts of those who experience his shows by always giving the audiences an honest face and by sharing his passion for what he does best, play his music. Gregorio will be playing solo at Lucid.

Don’t wait to get your tickets!
The Future is coming. See it at LucidNYC first!