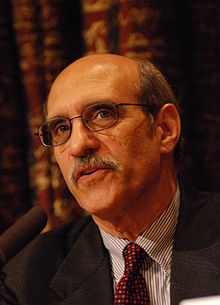 Martin Chalfie – is the William R. Kenan, Jr. Professor of Biological Sciences at Columbia University, where he is also chair of the department of biological sciences.[1] He shared the 2008 Nobel Prize in Chemistry along with Osamu Shimomura and Roger Y. Tsien “for the discovery and development of the green fluorescent protein, GFP”.[2] He holds a Ph.D. in neurobiology from Harvard University.  Chalfie was elected to the National Academy of Sciences in 2004.
He slept through the phone call from the Nobel Prize Committee.[5][11] When he woke up, he knew the prize would have been announced already, so he said “Okay, who’s the schnook that got the Prize this time?” And so he opened up his laptop, got to the Nobel Prize site and found out that he was the schnook!